The Foundations and Traditions of Constitutional Amendment

This volume is designed to guide the emergence of comparative constitutional amendment as a distinct field of study in public law. Much of the recent scholarship in the field has been written by the scholars assembled in this volume. This book, like the field it hopes to shape, is not comparative alone; it is also doctrinal, historical and theoretical, and therefore offers a multiplicity of perspectives on a subject about which much remains to be written.
This book aspires to be the first to address comprehensively the new dimensions of the study of constitutional amendment, and will become a reference point for all scholars working on the subject. The volume covers all of the topics where innovative work is being done, such as the notion of the people, the trend of empirical quantitative approaches to constitutional change, unamendability, sunrise clauses, constitutional referenda, the conventional divide between constituent and constituted powers, among other important subjects. It creates a dialogue that cuts through these innovative conceptualisations and highlights scholarly disagreement and, in so doing, puts ideas to the test. The volume therefore captures the fierce ongoing debates on the relevant topics, it reveals the current trends and contested issues, and it offers a variety of arguments elaborated by prominent experts in the field. It will open the way for further dialogue.
Table of contents
Introduction: The State of the Art in Constitutional Amendment
Richard Albert
1. Amendment Power, Constituent Power, and Popular Sovereignty: Linking Unamendability and Amendment Procedures
Yaniv Roznai
2. Constitutional Theory and Cognitive Estrangement: Beyond Revolutions, Amendments and Constitutional Moments
Zoran Oklopcic
3. Constraints on Constitutional Amendment Powers
Oran Doyle
4. Comment on Doyle’s Constraints on Constitutional Amendment Powers
Mark Tushnet
5. Constituting the Amendment Power: A Framework for Comparative Amendment Law
Thomaz Pereira
6. Sieyès: The Spirit of Constitutional Democracy?
Luisa Fernanda García López
7. Revolutionary Reform in Venezuela: Electoral Rules and Historical Narratives in the Creation of the 1999 Constitution
Joshua Braver
8. ‘Revolutionary Reform’ and the Seduction of Constitutionalism
Juliano Zaiden Benvindo
9. Constitutional Sunrise
Sofia Ranchordás
10. Constitutional Change and Interest Group Politics: Ireland’s Children’s Rights Referendum
Oran Doyle and David Kenny
11. Amendment-Metrics: The Good, the Bad and the Frequently Amended Constitution
Xenophon Contiades and Alkmene Fotiadou
12. Comment on Amendment-Metrics: The Good, the Bad and the Frequently Amended Constitution
James E Fleming
13. Constituting ‘the People’: The Paradoxical Place of the Formal Amendment Procedure in Australian Constitutionalism
Lael K Weis
14. Hard Amendment Cases in Canada
Kate Glover
15. Formal Amendment Rules and Constitutional Endurance: The Strange Case of the Commonwealth Caribbean
Derek O’Brien
16. The French People’s Role in Amending the Constitution: A French Constitutional Analysis from a Pure Legal Perspective
Jean-Philippe Derosier
17. The Implication of Conflation of Normal and ‘Constitutional Politics’ on Constitutional Change in Africa
Duncan Okubasu
18. Direct Democracy and Constitutional Change in the US: Institutional Learning from State Laboratories
Jurgen Goossens
Conclusion: The Emergence of Comparative Constitutional Amendment as a New Discipline: Towards a Paradigm Shift
Xenophon Contiades and Alkmene Fotiadou
ΣΥΝΤΑΓΜΑ: Κατ΄ άρθρο ερμηνεία
Η δημόσια διοίκηση μετά την κρίση 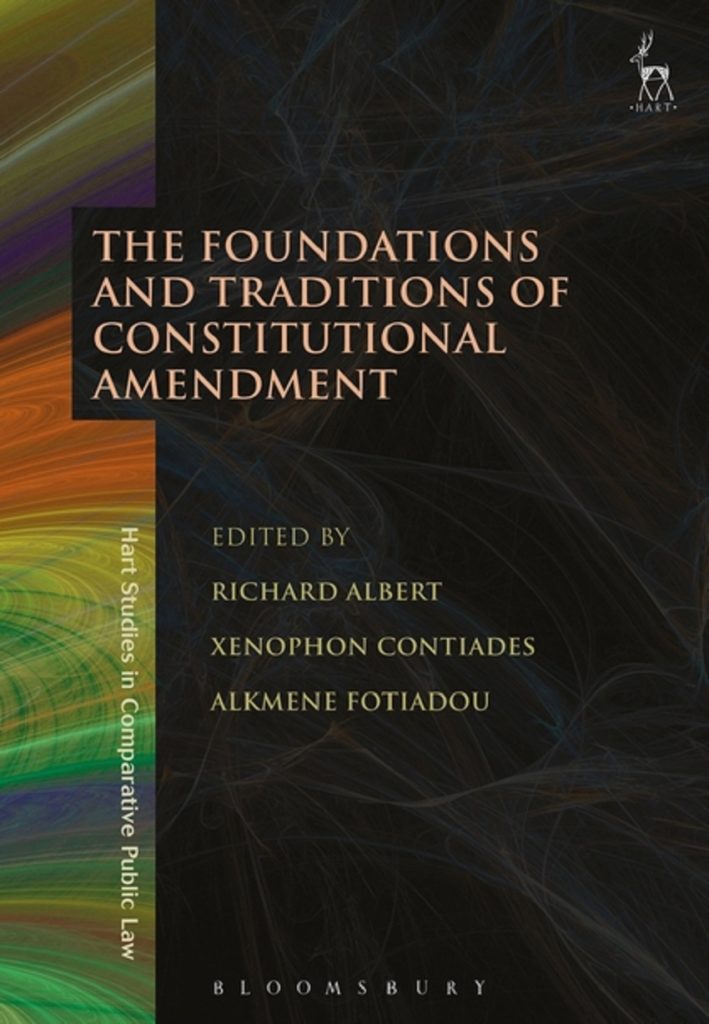